Natalie Hamilton is a translator and teacher. She turned her focus to Japanese study while living and working in Japan’s rural Oita Prefecture on the JET Programme. She was awarded a Master of Japanese Translation in 2014, which included a linguistics dissertation entitled Cracking the ON Yomi Code. Her new kanji textbook The Kanji Code has been an Amazon Top 10 Best Seller in Phonetics and Phonics since April 2019.

When we think about learning kanji, we tend to think of learning the meaning first, and then the readings. For example, 木 = tree, ki, MOKU, BOKU.
However, it can be useful to think of kanji in terms of its three main elements:
Mnemonics have become a popular way to learn kanji, with most of the major kanji textbooks now providing an etymology-based mnemonic approach  (such as Andrew Scott Conning’s excellent Kodansha Kanji Learner’s Course) or a creative and imaginative approach  (such as James Heisig’s now iconic Remembering the Kanji). I’m a big fan of both methods, but I think we are limiting the use of mnemonics if we only apply them to kanji meaning.
A few decades ago, it was assumed that kanji were read purely for meaning, without the need to produce the sounds. That is, we simply look at the kanji and the meaning goes straight to our brain, without saying the word in our head (so-called ‘subvocalization’). Reading kanji was seen as very different to alphabet-based languages, where you have to work out the sound to get to the meaning. Researchers have since debunked this myth, partly through research that has shown that native speakers of Japanese and Chinese rely on the sound hints in Chinese characters as much if not more than they do the meaning hints. Many Japanese scholars now recommend that more attention be paid to the sound of kanji (Matsunaga, 2016; Toyoda, 2013; Townsend, 2011).
When we learn kanji, we rely heavily on our memory. I recently read a fascinating article by Saul McLeod that explains some of the main principles of memory (it relies heavily on two books: Cognition (Matlin, 2005) and Cognitive Psychology (Sternberg, 1999)). As the article explains, there are three stages of memory: encoding, storage and retrieval. 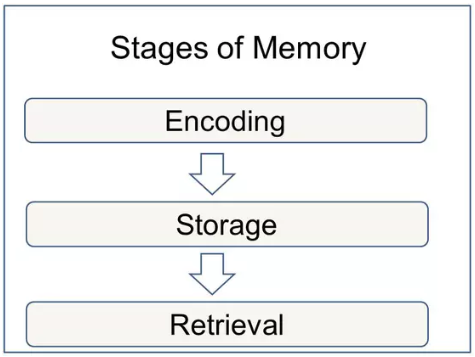 As McLeod explains, ‘when information comes into our memory system (from sensory input), it needs to be changed into a form that the system can cope with, so that it can be stored. There are three main ways in which information can be encoded (changed):
1. Visual (picture)
2. Acoustic (sound)
3. Semantic (meaning)’
This is the part that caught my attention. You noticed it too, right? Yes! The three elements of kanji correspond exactly to the three ways of encoding memory, where Visual = Form. Chance or coincidence? As a major fan of kanji, I’m inclined to think that it is by design, not chance. It means that while kanji are difficult, they also come with three effective ways to remember them.
In explaining the different ways of encoding, McLeod gives the example of remembering a phone number. If you visualise it on the part of the page where it is written, you are using visual coding. If you repeat it to yourself that is sound coding (so-called ‘acoustic coding’). And if you remember it by the meaning or creating associations, that is meaning coding (semantic coding).
So how does this help with your kanji study? Well, I imagine that many of you have been relying on meaning coding to memorize kanji up until now. Perhaps you’ve done this by learning the radicals which give hints to the meaning of kanji, or learning etymologies to help remember their meaning. I’m all for these methods, don’t get me wrong! But you might want to think about adding some memorization techniques that incorporate the sound and visual form of kanji, for a more well-rounded approach. I’ve listed some suggestions below.
Form  Learn the main types of kanji shapes shown above single; left/right; top/bottom/ left corner enclosure, full enclosure). When you learn a new kanji, take note of which shape it falls under. Does it have a side or top radical? Is it made up of repeated radicals such as 林 or 森? Is the main element (other than the side and top radicals) symmetrical or asymmetrical? Does it contain sharp, geometric shapes, or softer, elegant lines? In what direction does it seem to be moving? These are all hints that you can use to help you remember and recognise the kanji. If you’ve studied art or design, this way of thinking will probably feel quite natural to you. If you haven’t, read some articles on basic principles of art and formal analysis, and start thinking about kanji in a new, more visual way.
Note down any patterns you find, such as between the visual form and the meaning, or the sound. In The Kanji Code, I’ve suggested 45 ways that the visual form of kanji can be related to their sound.

Sound Learn the phonetic components, which give you a hint to the reading of at least a third of the Joyo (daily use) kanji. When you learn a new kanji, check whether it contains a phonetic component, and whether the ON reading of the kanji corresponds to that component. You’ll soon start spotting them in real written texts including newspaper articles and Netflix subtitles. Knowing the phonetics will also make it easier to guess the reading of new kanji you encounter. 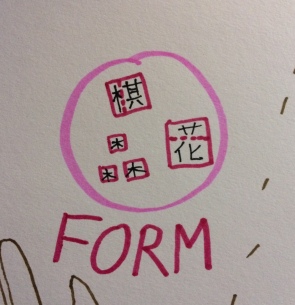 The Kanji Code provides a list of 150 phonetic components to improve your Japanese reading skills, and 45 visual groups. For each component, example kanji and common words that use the corresponding ON reading are provided.