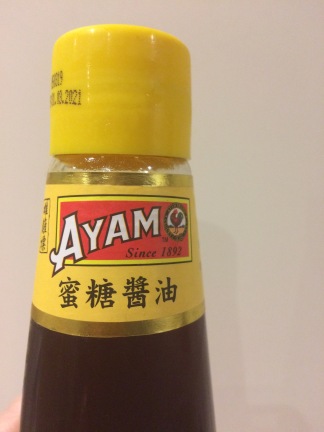 Natalie Hamilton is a writer, translator and lecturer in Translation Technology. She turned her focus to Japanese study while living and working in Japan’s rural Oita Prefecture on the JET Programme. She was awarded a Master of Japanese Translation in 2014, which included a linguistics dissertation entitled Cracking the ON Yomi Code. Her new kanji textbook The Kanji Code is an Amazon #1 Best Seller.

When I was studying for the Japanese Language Proficiency Test (JLPT) I found that knowledge of the phonetic components really helped with the kanji section.

I love finding kanji on food products now that I’m living in Australia. This Ayam sauce bottle has some good phonetics at play. It reads 蜜糖醤油 which literally means ‘honey sugar soy sauce’. The English name is Honey and Soy sauce.

According to Noriko Williams’ wonderful Kanji Portraits  the upper component originally represented a halberd (spear-axe) that had been wrapped up and put away for safe-keeping in a house or shrine. As we know those Japanese sure like to wrap things up!

If you zoom in you can find the component 必 with a roof on top. 必 appears in 必要 (= necessary HITSUYOU). Incidentally, HITSU rhymes with MITSU!

Sure enough, both of these MITSU kanji contain the concept of hidden or secret. Secret 密 contains the mountain radical ‘yama’. I imagine that secret treasure has been buried at the foot of a mountain. You could subtitle it, The Secret of the Mountain.

The honey kanji 蜜 on the other hand contains the insect radical 虫 ‘mushi’. This makes sense to me – honey is the hidden treasure that can be found inside a bee hive, which of course is made by insects. Call it The Secret of the Insects. It’s not so far from ‘the nectar of the Gods’, right?