Natalie Hamilton is a writer, translator and lecturer in Translation Technology. She turned her focus to Japanese study while living and working in Japan’s rural Oita Prefecture on the JET Programme. She was awarded a Master of Japanese Translation in 2014, which included a linguistics dissertation entitled Cracking the ON Yomi Code. Her new kanji textbook The Kanji Code is a #1 Amazon Best Seller.

I strongly believe in the value of explicitly teaching the phonetic components to intermediate learners of Japanese. Another Japanese teacher who feels this way is Hiroko Townsend, the author of an influential thesis that lists a number of phonetic components (‘Phonetic components in Japanese characters, Townsend, 2011). The thesis has received thousands of views, making it onto San Diego State University’s lifetime ‘Top Fifty’ as of 2018. This alone indicates that there is a strong demand among Japanese learners for knowledge of the components. 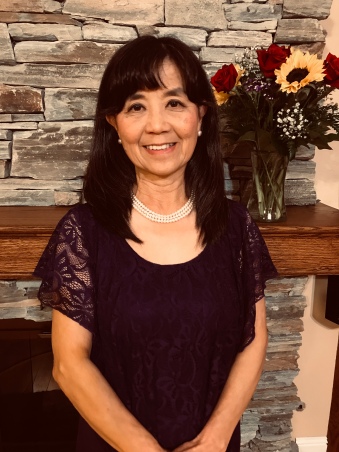 A native Japanese speaker, Townsend was born in Japan and had 14 years of Japanese education up to Tandai (2nd year college). She moved to California 30 years ago when she married an American. She is an Adjunct Japanese Professor at Palomar College in Southern California. She has a Master’s degree (Linguistics major) and a Bachelor’s degree (Japanese Studies major). She has taught Japanese at community colleges and language schools for 14 years. Before that she worked as a secretary/interpreter at Toyota and for the U.S. Air Force. Townsend has translated a number of Japanese children’s books into English, including Hani Susumu’s animal picture books. She has two adult sons.

When I was studying for the Japanese Language Proficiency Test (JLPT) in 2005-6 while teaching English in Japan, I noticed that kanji that shared certain phonetic components also had the same ON reading. I did quite a few internet searches for phonetic components but nothing came up. In the end I made my own list, which eventually led to The Kanji Code.

Over the years I have continued to intermittently search online for a list of the phonetic components, to see if one has become available. These searches have mostly been to no avail. In 2017, I stumbled upon Townsend’s thesis online, which included a list of the most useful phonetics. Coincidentally, we had been working on our dissertations concurrently in Sydney and San Diego, without knowledge of one another’s work.

The discovery of her list was encouraging, and convinced me that my preoccupation with the phonetics and other visual clues wasn’t a dead end, but was something in the zeitgeist and gaining momentum. This, teamed with other personal factors, gave me the impetus to push on with The Kanji Code.

Mainstream Japanese teaching still makes limited use of the phonetic components, and some people view learning them as a waste of time. However, I know from experience that learning them can  dramatically improve Japanese reading skills.

I spoke to Hiroko recently about the value of teaching the phonetic components to learners of Japanese.

Thank you for your time today. In your dissertation, you write that teaching the phonetic components will revolutionize Japanese teaching. Why do you think this?

If the students learn that many kanji with the same phonetic components usually have the same pronunciation, they are able to read the kanji. If they can read, they can search the kanji by hiragana writing and find the kanji to find the meaning. In this way, they can expand the number of kanji that they know.

You write that Japanese children are not taught the phonetic components. Why do you think this is?

Japanese teachers tend to instruct the students to memorize kanji with rote learning. I assume the reason is that the teachers may want to avoid the explanations of several sets of phonetic components that have the same sounds as you see in 1) to 6) below, when young Japanese students have not learned a large amount of kanji to compare with. They may also want to avoid the explanations of the kanji that have no associations with the phonetic components as you see in 7).

Let me give you some examples regarding the sound of はん*

Interesting – the number of exceptions does seem to be one reason teachers hesitate to teach phonetics.

You make a valid point that that a large number of vocabulary words consist of kanji compound words, so learning kanji ON readings is particularly useful for second language learners.

“Fifty-three percent of the entire vocabulary in the Kadokawa Japanese Dictionary (Hayashi et al., 1969) consists of on readings of kanji, which outnumbers kun readings at 37% (Matsunaga, 1995). In other words, students learn more on readings than kun readings, and if they were able to acquire clues to the pronunciation of on readings, it would be very practical for them.” (Townsend, 2011)

Because KUN readings do not associate with the phonetic component consistency, we need to look at ON readings. For example, the KUN reading of the following is not はん：板いた、坂さか etc.

It makes a lot of sense to study the phonetic components and improve your ability to look up unknown words which use so many ON readings! Thank you for your time.
You’re welcome.

The Kanji Code  is a new textbook that lists 150 phonetic components, the kanji that contain them, and example words that use those ON readings. It is available from a number of online retailers as an ebook or paperback.

*The examples provided in this blog post are not exactly the same as the ones in The Kanji Code. They were provided by Hiroko to demonstrate her points.

Hiroko Townsend can be contacted  at hirokotownsend @ att.net